It's been a very odd week.

Since last Wednesday my talk has been tweeted and retweeted over 50 times. I've been sent compliments by people I look up to and have acquired about 100 new twitter followers. I've had emails, requests to speak, and I've even been interviewed by the nicest man on twitter. I think Mike, who is one of the main reason this blog exists (see here for example), was just as surprised as me:

I've been blogged about by, so far about four people. I was mentioned by Hugh Dellar (Squeal!). My academic.edu page view count and the one on this blog both suddenly shot up (which is unnerving). This has also been the week I discovered that 20 seems to be the maximum number of notifications twitter goes up to and then it lazily displays 20+ at the bottom.
However, nothing surpassed the surreality that occurred when a couple of people retweeted the talk not to @ebefl -my handle- but to @russellmayne - a clinical strategist in Dubai.I thought the poor guy might take offence at being randomly tweeted at but no, he replied saying, 'wrong Russ' and then added:

Not only had my Googleganger been dragged into the chaos, he was merrily joining in!

All of this has come as a surprise. This was my first IATEFL. I've been trying to go for three years now. You might remember this post from last year when I complained because I couldn't go. If I'm honest, the only reason I put a talk in is because we have a rule that accepted speakers can always go to conferences. I didn't think many people would be interested in the topic but at least I'd get to tick it off my 'to do' list. I'd also maybe get to meet some of the people I'd been chatting with over the last two years.
I'd been pretty nervous all day beforehand and hadn't slept well all week. When I slipped out of Steve Brown's talk to go and prepare I was surprised by what I found. There seemed to be quite a lot of people in the room and more were coming. Then, Adrian Underhill strolled in and asked me a question. I was worried at this point. Next the guy at the back told me it would be live streamed I started to panic. People started to add extra rows of chairs and then the cameraman gave me a thumbs up.

The  mic picked up my feelings at that moment and preserved them for history. 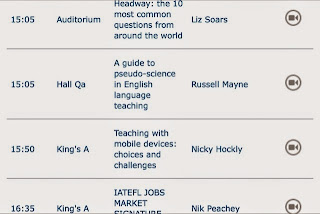 Later, someone asked me how come I got to be live streamed. I have absolutely no idea. It's really odd and I didn't realise how odd till I saw the list of names. Either side of me are people who are actually, you know, famous and have done stuff. I'm not very well known, have no published papers, haven't written a book nor have ever even been to IATEFL. I'd really love to know how they came to the decision to pick me. I honestly haven't a clue. Maybe it was a mistake?

I should take a minute here to say thanks, though. I'd been feeling a bit despondent about conferences lately. Having had about 5 and 7 people come to my last two BALEAP talks, I was beginning to wonder if it was worth the time and stress of writing and presenting. Perhaps no one was really interested? The incredible response has made me think again. I'll have to delete my half-written "conferences are a waste of time' blog post now. I'm genuinely very happy that so many TEFLer seem to agree with the sentiment of the talk.


The highlight of the day for me (aside from not being lynched, obviously) was meeting so many lovely twitter bods like Nicola Prentis, Mike Harrison and James Taylor (sorry if I missed anyone out, it's all a bit of a blur) Best of all was when Hugh, Steve, Carol and Chris bought me beer and sat and chatted with me until I had to catch my train. (Side note: NO ONE looks anything like their twitter picture except for Hugh Dellar and Jonathen Sayers who look exactly like theirs)  I wish I could've been there all week. Maybe next year? That is assuming I haven't been done in by a shadowy TEFL illuminati.
I'm going to try to put up some extra info about the talk but in the meantime, here are some links to old posts on the subject.

Learning styles, popularity, other issues
Multiple intelligences criticisms and popularity
NLP claims, NLP, Council article on NLP (with response from the website in comments) and a weird misuse of Thornbury half way down here to support NLP.
BrainGym