Is Korea the worst place to teach English?

Google "don't teach" and what comes up on auto-complete?  "Don't teach in South Korea" meaning that it's a pretty widely searched for statement.  Although this is not evidence of anything it's not difficult to find horror stories on the net relating to teaching in Korea.  So is teaching in Korea really so bad?

At the start of this blog it’s probably best to say that I’ve never taught English in and to also add that I’m sure there are plenty of people teaching in who are having or have had a really great time there.  However, the shocking regularity of unsavory stories about the EFL world in has always made me wonder just what the attraction of teaching there is.

The first time Korea popped onto my radar was while I was teaching in Japan and I read a US government warning to avoid teaching in Korea.  The warning has since been removed but it was up for a fairly long time ( a couple of years at least) and reads as follows:

Due to the growing number and seriousness of problems experienced by American citizens teaching English in Korea, we counsel against  taking such employment, even at reputable colleges or universities, except upon receipt of a favorable written referral from a current American citizen employee.  We receive several complaints daily  from Americans who came to Korea to teach English.


Despite contracts promising good salaries, furnished apartments and other amenities, many teachers find they actually receive  much less than they were promised; some do not even receive  benefits required by Korean law, such as health insurance and severance pay. Teachers' complaints range from simple contract violations through non-payment of salary for months at a time, to dramatic incidents of severe sexual harassment, intimidation, threats of arrest/deportation, and physical assault.


Now this is a pretty spectacular message for anyone in the EFL world.  We all know about dodgy schools that illegally employ uncertified English teachers, and we sometimes hear stories of schools conning teachers or teachers leaving early, or behaving in an inappropriate or even illegal way.  These things do happen from time to time.  However this is something quite different.  This isn't just a warning about some schools but the US government were pretty much saying "just say no kids!"   Not even in the hallowed halls of universities were foreign teachers safe from being ripped off. 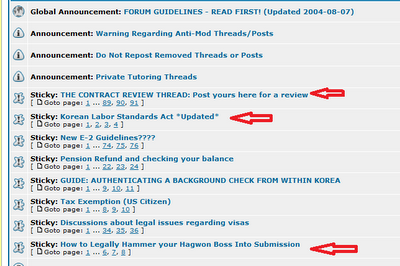 I started to notice a pattern when I went to daveeslcafe job hunting in 2003 and found something quite odd. Not only did Dave have a separate section for 'Korea Jobs' (distinct from the Asian jobs section) but there was also a separate section called something like "complaints about Korea".  Now things have changed in the 10 years since I started teaching and there is a separate section for Chinese jobs as well now but the Korea complaints section under the guise of "Korean job discussion".  click the link though and you'll find several stickied threads with some very telling titles (see picture).  It is also relatively easy to find some horror stories if you scroll down a bit further, like this one.  So many complaints and enough job offers to warrant a separate section...clearly something was going wrong!

Yet it seems like there is a almost a perfect mirror of this situation among Koreans themselves.  That is to say that while Koreans are getting a bad rap for their treatment of foreigners, the Korea press seems to take great delight in bashing foreigners.  While I suppose foreigner bashing sells papers in any country, it seems to be somewhat more pronounced in Korea.


So rather than sympathy for foreign English teachers who are being exploited and abused by Koreans (to the extent that the US government tells people not to go there) many people seem to hold a massively negative view of the English teachers themselves.  The most shocking manifestation of this phenomena can be seen in this story about a Korean man who spends his free time tracking (stalking?) English teachers.  The chap in question believes he is protecting Korea from dodgy foreigners, though how he manages to spot the dodgy ones is anyone's guess though he claims he has this ability.  Some believe that the group's activities lead to the compulsory HIV testing of foreigners working in Korea.


I've always felt when reading these stories the best thing for both parties would be to just stop seeing each other.  Korea's relationship with its English teachers seems to be like a failed marriage that continues "for the sake of the kids".  If some Koreans abuse English teachers and believe that they are all lazy sexual predators, the best thing to do would be for teachers to stop going.  Of course, the problem is that what tends to happen is that the 'good' teachers will find work elsewhere in Asia and the very worst teachers who can't manage to get work anywhere else may drift to Korea where teachers are in short supply (that's not to say teachers in Korea are all 'the very worst').  These are just the kind of people that the Koreans seem to be worried about and yet they are creating the perfect conditions for them.


Luckily help seems to be at hand!  Engbots!  The article notes that " unlike human teachers robots don’t need salaries or benefits." which is perfect as by all accounts the some Koreans don't like providing them. (edit: check comments -Mike tells me the Engbots thing is a bit of a myth.)


As noted at the start I have never taught in Korea, so if you feel some of the information here is wrong or misleading please get in touch or comment and I'll make every effort to change it.
Posted by mallingual at 01:11