I follow a fair few teachers on twitter and so I get to read a lot about education. One of the  faces most commonly peering out of tweets and retweets at me, is that of Albert Einstein; usually with some pithy quote attached to his name. More often than not these quotes are attributed to Einstein, but he didn't say them. As with the following examples.


I recently got involved in a spat with a guy who posted one of these quotes. The klaxon of "someone on the Internet is wrong" began buzzing in my head. No. resist. I said to myself, but the urge was too great. Our conversation went like this: 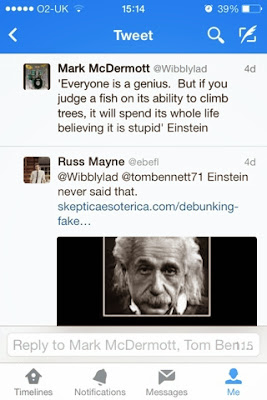 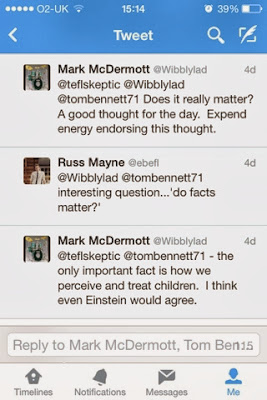 Leaving aside the argument as to whether facts matter or not (hint -they do) just why is Einstein such a popular figure for educators to (mis)quote? What is it about the German Jewish physicists that appeals to some modern educators? Einstein isn't popular among all teachers. Instead you tend to see his stuff quoted by teachers who have a strong disposition towards things like creativity, student emotional development and imagination. The kind of teacher who derides tests and wants students to 'think outside the box'. Now there's nothing necessarily wrong with these ideas .I'm just merely pointing out the  odd correlation I've noticed between Einstein and beliefs of this sort. I say 'odd' because a gifted mathematical genius, smart in the most traditional sense who excelled at school doesn't strike me as the poster boy for the values being espoused by these teachers. What's that you say? But Einstein didn't do well at school!  Ah, before we continue, there are a few myths that need debunking. Here's a quick recap. 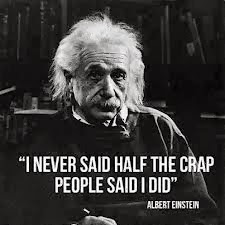 Myth: Einstein did badly in school
No, he did really well in school. He aced almost everything except French. He tried to enter university when he was 16 but his French held him back (damn you, French!!)

Myth: Einstein failed maths
Nope, he could do differential and integral calculus by the age of 15 whereas I don't even know what those words mean.

Myth: Einstein had learning difficulties and was an average student
This one is tricky because Einstein didn't speak a lot until he was about 5. He did speak though. His biographer Pais (1982) claims that Einstein started speaking in whole sentences between the age of 2-3 and at age nine he was accepted into a prestigious school. It would seem quite odd for an 'average' student with learning difficulties to be accepted into such a school. The only 'learning difficulty' he seemed to have was in that he hated the way his teachers taught, -i.e. memorising large amounts of data. This to my mind, makes Einstein quite a 'normal' child.

There is little credible evidence to support this claim. Mostly these claims were made retroactively. Also Autism and dyslexic are both somewhat problematic terms. Autism is a spectrum disorder and dyslexia is not one condition with a clear definition. Thus to say Einstein was autistic or dyslexic is probably not true and even if it were true probably doesn't tell us very much.

So it seems there are in existence, two distinct Einsteins. There is 'physicist Einstein' who was a smart kid, good at school (with the exception of French) and brilliant at maths. This Einstein went on to publish hundreds of ground breaking articles concerning physics and won the Nobel Prize. Then there's 'educator Einstein'. A young boy with learning difficulties who was written of by foolish teachers unable to see his potential. He failed at maths and yet went on to become a world-renown genius. He spent much of his later life poised before a blackboard making pithy statements about education to his enrapt students.

While it is true that Einstein trained to be a school teacher and lectured at various Universities, it's also true that for two years he failed to find a teaching job and his only teaching was at university level. It's also likely that none of the teachers quoting his thoughts on teaching have any idea how he fared as a lecturer. Was he any good? Did his students like him? Did he teach well? Among Einstein's hundreds of papers not one dealt with teaching or education. Despite this he's claimed by teachers as one of their own, there are even (flawed) academic papers speculating about Einstein's views on teaching


So why exactly is Einstein popular among  some  teachers? It would seem that Einstein is a kind of short-hand for 'genius'. Stick his picture next to a quote and the quote gains 9000 Internet points more of credibility than just a normal quote. This is an example of the cognitive bias known as the Halo effect. This is where one attractive characteristic can lead people to assume more favourable things about a person in general. The halo effect is well known and well studied. It's what leads to attractive teachers getting better student ratings than less attractive teachers, and to attractive criminals getting shorter sentences than plainer ones. Einstein wasn't hot, he was smart, but the effect still holds. E = S = T or Einstein = smart = true. Smart guy A says B so B must be true because smart guy A is smart. Of course, this is a non-sequitur. If Einstein was talking about Physics you would do well to listen, but would you want his advice on marriage and dating?

What's strange about all of this is that fans of 'educator Einstein', those who quote him  regarding 'imagination' and stress his poor school record are often the same people who would normally bristle at 'outsiders telling teachers how to teach' especially 'ivory tower academics' and 'men in white coats'. How many times have we seen researchers or scientists dismissed because they're not at the 'chalk face' and don't understand the realities of the classroom, even when that researcher is/was an educator themselves?

Also odd is that teachers often use Einstein to back up things like creativity, imagination and alternative conceptions of intelligence, focusing on the idea that 'standard' definitions of intelligence  are not the be-all and end-all of education. Yet Einstein was as 'traditionally smart' as they come. He was not smart in a 'fish climbing trees' sense, or a 'bodily-kinaesthetic' sense but smart in a 'discover how space and time works through complex maths' smart. So why do teachers promoting the notion that 'everyone is clever in different ways' use the guy who is smart in the most vanilla way to push that point home? 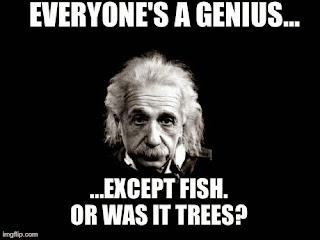 Sure Einstein hated the way he was taught, he hated memorising facts and thought that imagination was important, -but so what? If an idea is good, it doesn't matter who says it, be it Einstein or Hitler. That is why when vested interested attack, for example, Charles Darwin they are missing the point. Darwin doesn't matter. The theory of evolution matters. Good ideas are good whether Einstein said them or not, -and bad ideas are bad ideas regardless of who said them. We need to focus on the text, not the image.


So we have teachers misquoting a famous physicist, and academic, who may or may not have been a good teacher, but was certainly very good at maths and science to support the view that education isn't just about being good at things like maths and science.
Am I missing something here?