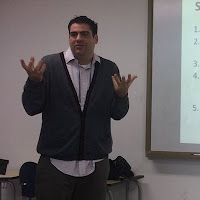 When this blog first started I saw it as being something like a Private Eye kind of blog for ELT. I initial wrote posts on things like London MET losing its highly trusted sponsor status or criticisms of the British Council. One of the first posts I wrote was about whether Korea was 'the worst place to teach English.' The title of the blog post came from a google autocomplete 'is Korea...'.

The post wasn't very serious, and as I note, I've never set foot in Korea in my life. That said, it was, like much on here, just me thinking out loud. I posted it when I'd just started using twitter and I remember someone writing that the post was racist or discriminatory or something like that, and promptly blocking me.

I was quite alarmed by this reaction and thought perhaps twitter wasn't the place for me. Around that time, Michael Griffin who back then had some amazing number of followers, (like 700 or something!) retweeted the post and engaged with me about it. I think a lot of people on twitter have had the experience of being encouraged by Mike and I'm grateful to him.

Anyway, as time went by the post (5th most viewed of all time) started to look less and less at home on this blog. So I asked Mike to write a rebuttal of it and I'm really please to add him to the roster of guest bloggers on Evidence Based EFL.

One of the first times I read this blog (which I later came to know and love) was a provocatively titled post “Is Korea the worst place to teach English?” I should mention the post was about South Korea (the Republic of Korea) and not North Korea (the…ahem Democratic People’s of Korea). I’d guess that North Korea is among the worst places on earth to do much of anything. If you are interested in learning more about teaching in North Korea I can recommend the (in my view at least) flawed but interesting book, Without You There Is No Us  which the New York Times called “a chilling memoir.: If you are interested in reading one man’s thoughts about teaching English in Korea and why there used to be many complaints please read on. I want to be clear that this is truly just based on my own thoughts and experiences and is much more anecdata than any sort of evidence-based anything. I’d also like to offer the usual caveats about generalizations. Please feel free to imagine the words “sometimes” or “typically” into any sentences that jump out at you as a step too far towards a generalization. Also, in this post I write about the experience and situation related to “native speakers” which it should be noted is actually a very small minority of those teaching English in South Korea. I am also just focusing on the private sector (which means I’m not focusing on public schools or tertiary education).

My first full-time (I hesitate to use the word “real”) job was at a small family-run language school in South Korea (hereafter Korea) way back when. In the era I started, (before the 2002 World Cup) I considered the private education system to be something like the Wild West. Young folks from all over the world (well, actually, not from all over the world, just from the 7 countries deemed to be populated enough by “Native-speakers” of English) were seduced by the  chance of quick, stress-free, and easy riches. There were extremely low barriers to entry which might partially answer Russell’s question about why so many teachers went to Korea in the first place. Korea was in the midst of a push for globalization (and in the aftermath of a financial crisis) and English skills often made a major difference in an extremely competitive job market. Further, the testing and thus teaching (hello washback!) had previously been laser focused on grammar and reading/writing and now there was a sudden push for speaking and listening skills. The belief was that native speakers could fill this gap and thus teachers were hired by the planeload. The idea was that “free-talking” with “native speakers” would be the panacea for any and all ills related to English education. 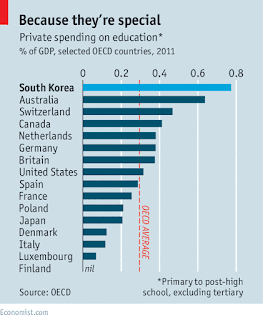 The element of making a quick buck was also present for language schools (hagwon) and their owners. I got the sense many hagwon owners rushed into the business without much interest, knowledge, or acumen related to running a business or educating people. Korea was gripped by English Fever and it was easy for hagwon owners to make a bunch of money without caring much about what they were doing. I often thought if it was not English education it could be a coffee shop, software, plastics, or some other trend. So, we had a case of easy money with a lack of sincere competition or a desire to change. Hagwon owners were not always known as the most scrupulous people around and the boom period helped keep them afloat.

To my view, in the past, Korean students of English were not very sophisticated consumers of English education. They knew that English was important and accordingly spent time and money in various directions in order to get a leg up on the completion. So, there was a situation where inexperienced and ill-equipped hagwon owners were hiring inexperienced teachers to teach English to students who didn’t really know what they needed to learn (among those who were not forced by their parents to go to class.) That doesn’t sound like a recipe for success does it? For good measure we can add in cultural differences and language barriers to the mix. Again, those involved were not always life-long teachers or managers but rather people quite new to it. I think there was also the element of hagwon owners sort of resenting their “cash cows” who they didn’t value as professionals but rather hired just based on their native tongues and not their skills or knowledge. Many of those hired to teach were not only working full-time for the first time in their lives but were also living abroad (and with the exclusion of college, maybe living away from home for the first time.)  Since these teachers were given limited training and very little in the way of support it’s no wonder there were so many problems.

I think there were bound to be disagreements and challenges. If we squint a bit we can see these as growing pains in an industry that was growing rapidly without a chance to consider where it was going. There were certainly a lot of mismatched incentives and goals.

Readers with a keen eye for detail will have noticed I used the past tense above. I don’t want to paint an overly rosy picture but I do believe things have changed for the better. I think much of what I wrote above is actually in the past. I don’t think things are perfect but I think they are not as bad as the past or as bad as South Korea’s lingering reputation for TEFLers. I truly believe the industry as well as the parties involved has matured.


In the 2012 post mentioned above Russell wondered why he was hearing and finding so many horror stories about teaching in Korea. My simple thought is and was that those who are generally happy and fine with things and getting on with their life don’t have the energy, time, or inclination to get on Dave’s ESL café (or wherever) and bitch about a whole country or the private education system of a nation they find themselves in. I’d also posit that perhaps the availability bias was at work and the emotionally charged and scary nature of some reported experiences in Korea made them stick out and thus be more memorable. Hopefully with the changes and development I’ve alluded above to the horror stories will become just another memory.