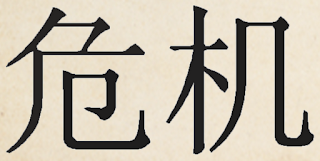 In the Guardian today an article started with the sentence "The Chinese, according to John F Kennedy, use two brush strokes to write the word "crisis". The first stands for danger; the other for opportunity".  Supposedly this refers to 危機 weiji.

firstly, it's certainly not two "brush strokes".  Depending on whether you use traditional or simplified characters, it's either twelve or twenty two brush strokes.  Two would be miraculous.  ThoughKennedy probably meant two characters.

secondly, While the wei 危 does indeed mean danger and usually appears in compounds like "dangerous" 危險, 機ji doesn't mean opportunity. The mistake perhaps arises because ji 機 appears in the compound 機會 jihui, which does mean opportunity. However, on its own the character doesn't mean anything, but most would see it meaning "machine" as it appears in the compounds 飛機 feiji airplane 機器 jiqi machine, 機算計jisuanji calculator,  機車 jiche moped and 機器人 jiqiren robot.


The second problem with this statement is that it leads the reader to a kind of Sapir–Whorf conclusion that's wholly unwarranted. We are suppose to take from this sound-bite that the Chinese, because of their language, see crises as opportunities (and perhaps, therefore we should learn this from them). However this is very silly and ranks up there with Eskimos having [insert number] words for snow. Take the word "breakfast" which is composed of the word "break" and "fast"; do we actually think about the breaking of a fast when we use this word? I would argue that you would be a very peculiar individual if you did.  If a Chinese reporter indicated that the English  view breakfast as a religious event, or that English speakers were such gluttons that going to bed, and thus not eating, was such a strain it was considered as a "fast" it would seem laughable to us.


So in short, great for motivational speakers and pithy facebook updates, not much good for linguistics.