'What doesn't kill you, makes you stronger.' 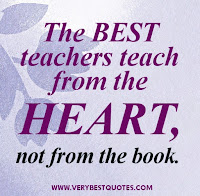 These sentences both sound really profound while being nonsense, and nonsense that can very quickly be identified as nonsense. In both cases a few seconds of thought would be enough to show this. The word 'lightning rod' and the existence of lightning rods is not a contested issue. Lightning rods exist and are placed on the side of tall buildings precisely because lightning often strikes the same spot (tall things) repeatedly. Similarly it's not hard to think of things which while not killing a person would definitely not leave them any stronger. Ebola, spinal injury or brain damage are a few examples. And yet, like the bizarre 'it's the exception that proves the rule' despite making no sense and this fact being apparent to anyone with normal mental capabilities, these phrases continue to be used. 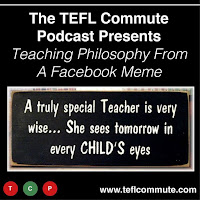 One place they're particularly prevalent is on any social media platform that teachers have discovered. Social media + education has led  to the rampant proliferation of what Carl Hendrick calls, 'the scourge' of motivational posters'. Little nuggets of 'wisdom' about teaching usually plastered over the top of an inspiring landscape or picture. Alternatively the quote appears next to a famous figure (Einstein is a popular choice) who probably didn't actually say the quote in question. They're so prevalent they've inspired a satirical section on Shaun Wilden and Lindsay Clandfield's TEFL commute podcast.

The internet is awash with these edu quotes and they come In a few different flavours. There's the ego-bolster: memes about how hard teaching is and what under appreciated heroes teachers are.On a side note, it's interesting that such a large number of these memes exist. If you google, 'doctors are heroes' or 'even 'firefighters are heroes' you get far fewer memes than you do for teachers.  Next, there's the heart warming type usually including the word 'heart' in the quote and a picture of a heart somewhere. And finally there are the deepities.


Deep deepities
The word Deepity was coined by Daniel Dennett. He explains it (see video) thus: 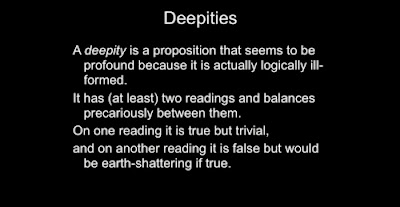 The example he goes on to quote is 'love is just a word'. He makes the point that saying love is just a word is either false (it is an emotion, a condition or  way of explaining a phenomenon) or it's trivially true (yes its a just a word, like pain or joy or sadness, but why even say this?). Other deepities include 'beauty is only skin deep', or there is no I in team'. I am inclined to add the phrase 'everyone learns in different ways' into this category. If it means 'everyone has a preferred way of studying' then *shrug* who cares? If however the implication is that learning, as in the process that occurs in the human brain differs among people, then that would be truly earth shattering as "the architecture of human brains varies very little among adults or among children” (Long 2011:375).

It is perhaps not at all surprising that we find NLP cornering the market in these kinds of pseudo-profound edu memes, after all, reproducing form without bothering about the substance is kinda NLP's thing. Here are a few examples that I've collected over the years:

‘[4]There is no such thing as reluctant learners, only inflexible teachers’ (Winch 2005).

The fact that these statements have appeared (and continue to appear) in print in teacher training publications is hard for me to understand. Not only are these quotes, after a minute of consideration, obviously not true, in many cases they seem to absolve students of any responsibility and lay everything at the teacher's feet. what kind of masochist believes that a [4] reluctant learner must be the fault of the teacher or that [3] any student failure is the teacher's fault?  And the notion that 'all behaviour has a positive intention' seems indefensible until you notice that NLP experts helpfully redifne the word explaining that 'positive here, does not mean good so much as goal driven.' In other words, people do things for reasons. Behold! An earth-shattering truth reduced to banal triviality.


My most hated of all 'edu memes' is the infamous fish tree meme. I hate it for many many reasons. Firstly, Einstein didn't say it. Secondly if everyone is a genius then no one is a genius.

This quotes is wheeled out usually in opposition to standardised testing or in calls to rethink education. Climbing a tree is unfair for a fish because a fish can't climb a tree. It follows, supposedly that this is just like how maths tests are bad for those who are not mathematically gifted. Yhe 'take-away' is supposedly that a fish doesn't have the ability to climb a tree and some kids don't do well at maths, and so tests are evil, right? This poster seems superficially deep, but why would  teachers ask students to do things that they were physically incapable of? I could rant on about this quote for a whole blog post but I'll direct you to this one by Todd Pettigrew instead.


It seems odd that actual discussions about teaching and learning have, in some parts of the education world been replaced with pithy saccharin soundbites tweeted and retweeted ad nauseam. As Carl Hendrick notes. these kind of posters show "a culture that privileges the media-soundbite over critical reflection" Ironically, the same teachers who insist on the importance of critical thinking and creativity as the very pinnacle of a good 21st century education are often the ones thoughtlessly reproducing these edu memes.


My 100th Blog post. For this occasion I wanted to write something clever, deep and satirical. I couldn't do that so I just wrote this instead. Thanks for reading.
Russ