Why we need evidence part 2: How we know what isn't so 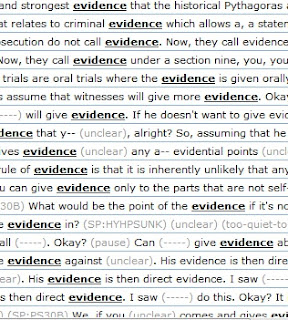 Are you more likely to die from a car accident or from cancer? And just how much more likely is the one than the other?

While writing this post, the excellent 'EFL teachers shouldn't prefer blonds' appeared. It is definitely worth a read and gets right at the heart of what I'll talk about here, even mentioning the availability error.
The availability error/heuristic means that people tend to favour information that is more available to them.  For example, If you ask people whether they are more likely to die from a car accident or cancer many people would suggest that they were perhaps about equal, after all cars are very dangerous. Of course, people dying of cancer doesn't make the news very often and so the fact that you are over 10 times more likely to die of cancer than being in a car accident, isn't as 'available'. Similarly, people may worry about terrorists or shark attacks, but the likelyhood or either of these happening to you is so remote as to be almost meaningless. That said, both of these are still more likely than winning the lottery, but in the UK round 2 million play it every week.


As Andrew Walkley points out, the same goes for teachers (and material writers) understanding of language. We think we know what people say, we think we know how people talk but actually we often have no idea. We think we know which words are 'common' and which are less so but as this game shows, we probably get it wrong as often as we get it right (thanks to Rachel for the link). This is because humans don't do statistics very well.

For example, imagine if I told you I was going to spend a lesson teaching students about the the word 'just'. you may be horrified at my wasting so much time on a word like that. However examining Nottingham's corpus of spoken English reveals that "just" is the 31st most commonly used word in Spoken English (O'Keffee et al 2007: 35). Other words are "yeah" (no.12), "mm" (37) and "er" (38).

Generally our intuition about language is wrong. What we end up teaching students is what Lewis calls "TEFLese" (2001: vii) and Stubbs notes that many learners may be able to 'speak grammatically, yet not sound native like' (2006:115) As long ago as 1998 this approach was being questioned:


Working on educated guesswork or hunches when writing dialogues and transactions for coursebooks or when selecting language to teach is highly questionable. (williams 1998:53)

For example, maybe today you taught a class.  And depending on where you work (China, Korea and Japan, yes, I'm looking at you!) perhaps the class featured a dialogue like the following:
A: Hi, How are you?
B: I'm fine thank you, and you?
A: I'm fine too, thank you.
Now it's easy to pick fault with this for being unnatural, but what about this one (Nunan and Lockwood in Carter et al 2005:79):

If you're like me then you have probably taught this kind of thing before. It looks pretty authentic, doesn't it? Certainly better than the 1st example. Yet reality looks quite a bit different (Burns at al 1996 in Carter et al 2005:80):

Receptionist: Sorry to keep you waiting.
Patient: That's alright um I'm just calling to confirm an appointment with Dr X for the first of October
Receptionist: oh...
Patient: Because it was so far in advance I was told to.

Receptionist: I see what you mean, to see if she's going to be in that day.
Patient: That's right
Receptionist: Oh we may not know yet.
Patient: Oh I see.
Receptionist: First of October...Edith....yes.
Patient: Yes
Receptionist: There she is OK you made one. What's your name?
Patient: At nine fift...
Receptionist: Got it got it.
Now whether or not we expose students to this kind of dialogue is an argument I'm not going to get into here, but the point is that despite what we think we know, we are often very bad at judging what actually is.

And if we have no idea about how language is really used how can we expect to make the best use of our students' time? This is where the evidence discovered by corpus linguistics is invaluable to teachers. Computers don't suffer from the availability error. Corpus has revolutionised dictionaries, textbooks and language teaching. But it has only managed this because we were so wrong, so often. If our intuitions about language had been largely correct, it's doubtful corpus would have made the impression that it has.

Williams, M. (1998) Language Taught for Meetings and Language Used in Meetings: Is there Anything in Common Applied Linguistics 9/1: 45-58